The Who, Where, What, Why and When in your area. Local news, events and services at your fingertips. Advertise locally, regionally or nationally!
Home
Broadlands Orchard
Area In-depth
Shops Cars Health Fitness Eco Money Business Faith
Family Schools Teens Legal Computers Dating!
Reference Resources Forces London 999
Click to create an instant advert on this page and appear on
Focused, cost-effective advertising taken to a new level from £37.50 per year! 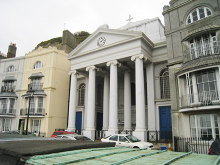 Dating around Peasmarsh!
We have one of the UK's largest dating websites - focused on Peasmarsh!  There are mature, all age, Asian and Christian singles just waiting to hear from you. Browse and upload your profile FREE !

Do have a look at the Premier Daily Bible reading below. It is really so good.

Most of the letters in the New Testament start with a greeting in which the author identifies himself. The only exceptions to this are the letter to the Hebrews and this first letter of John. It seems to me that John was so eager to share his message that he hadn’t got time for such pleasantries! He wanted everyone to know that Jesus really was the Son of God and that he came and lived a fully human life here on earth. John
wrote this letter about 100 years, or two generations, after the end of Jesus’ earthly ministry. Some people had come up with the theory that Jesus wasn’t really human at all but merely appeared to be human. But John would have none of it. He knew for certain that Jesus really did come to this earth because he had seen him with his own eyes – and even touched him.

Throughout the centuries, there has been continuous debate about whether Jesus really was an historical figure. The evidence for Jesus is in fact incredibly strong. We not only have the four Gospels, the earliest of which was probably written within thirty years of Jesus’ ministry, but we also have the letters of the apostle Paul, which were written even earlier.

Of course, all these writers were followers of Christ so it is important to also look for evidence of Jesus’ life from non-Christian sources. Most notable of them was Flavius Josephus, a Jew who wrote a history of Judaism in AD 93. He made two references to Jesus. About 20 years later, two Roman politicians called Pliny and Tacitus wrote about Jesus. Tacitus recorded that Jesus was executed while Pontius Pilate was the Roman prefect in charge of Judaea, and Tiberius was emperor, both of which we know to be historically accurate. And Pliny records that when he was governor in northern Turkey, Christians worshipped Christ as a god. Neither of them liked Christians – Pliny writes of their “pig-headed obstinacy” and Tacitus calls their religion a destructive superstition.
The fact that Jesus was a real man was desperately important for John, and still is today. Our salvation depends upon it.

QUESTION
What encouragement do you draw from the fact that Jesus was a real historical figure?

PRAYER
Loving God, thank you that because of your love for us you sent Jesus Christ to our world.

Message from Premier Offer Get 3 issues of your Premier Christianity print magazines for only £6.50! We are launching our new Pay Quarterly subscription with a great offer. Subscription includes unlimited articles online and access to the Premier Christianity app, too. Be equipped, inspired and informed from a Christian perspective. Subscribe to the UK’s leading Christian magazine now!


We also use this Daily Bible Study. It is an excellent all-rounder. Please CLICK to see a new  Bible Study every day. Don't forget you have a major faith resources section on this site. You can use it to find materials or to contact churches in Broadlands Orchard or around Peasmarsh. You can find church services on holiday by changing the site postcode.

Godshiker - Watching, waiting and catching the wave of faith

Our focus today is all about watching, waiting and building faith – and then crucially catching the wave of faith as we build our spiritual treasure of faith.

This Microportal is built on the 2day Microportals platform which provides you with 3 click access to local and global information crucial both to your personal and working life. The platform provides live local data on transport, what's on, accommodation, eating out, shopping, sport, religion and weather as well as comprehensive reference and resource sections including TV, radio, online shopping, route planning, health, education and more.